My Trip to Honduras

Part 3 - Serving the Poor
The Soles4Souls tagline is "wearing out poverty." I've been intrigued by it since the first time I heard it. To me, it acknowledges solving poverty isn't a drop and go proposition. It involves relentlessly showing up, lifting up, building up - it involves a passionate I believe you can do this and not the shallower I'm so sorry you're in this.

I'd read Soles4Souls' CEO Buddy Teaster's book, Shoestrings, which beautifully tells the Soles4Souls story. I've also had the chance to spend time in our local Soles4Souls distribution center here in Richmond, as well as an afternoon in the Soles4Souls headquarters in Nashville. I've walked away from all of these experiences believing this is an amazing organization run by giant hearted and bright people.

Even still, I've wondered, are they and we really capable of wearing out poverty?

Answering that question was one of the main reasons I knew I had to go to Honduras. As I said before, when you get involved with Soles4Souls, they don't just casually invite you to follow the shoes you collect or the money you donate to the countries where they're attempting to wear out poverty, they all but send an Uber driver to pick you up and transport you there.

In Honduras, I got to experience two ways Soles4Souls attempts to wear out poverty. In yesterday's article - What Motivates You? - I talked about our visit to Raul's gym where he and his brother train young men to be healthy in body, mind and spirit. The gym is a place where Honduran boys can escape a life on the streets and enter into a life of employment and education and family - three things sadly missing in most Honduran lives.

Raul is one of the micro-enterprise partners who purchases used shoes from Soles4Souls - shoes like those I and so many who've supported me collected in shoe drives leading up to my trip. These shoes are then sold to local entrepreneurs who start or maintain small businesses of their own, wearing out poverty in their own families and communities.

The money Raul brings in then goes toward running the gym. While I was in Honduras, Raul shared his vision of opening more gyms around the country. While I was standing in his gym, watching young men work out and train, looking at all the equipment they have at their disposal, and picturing this model spreading across Honduras, I couldn't help but picture the role our unwanted shoes played in bringing that gym to life.

My shoes weren't sitting in a landfill somewhere, but instead they were the sounds of weights clanking together and young men screaming out with pride and dignity and hope as they trained for a new life. It was the most beautiful kind of recycling I've ever experienced.

The other part of the Soles4Souls operation I got to experience in Honduras was distributing new shoes to those who need them. Souls4Souls partners with numerous shoe companies who donate new shoes that are distributed on trips like the one I took to Honduras. And as much as seeing Raul's gym opened my eyes to the possibilities our shoes bring to the country, the shoe distributions opened my heart to the belief that possibilities aren't good enough. They built a conviction in me that there are some things in life we should all be able to take for granted. 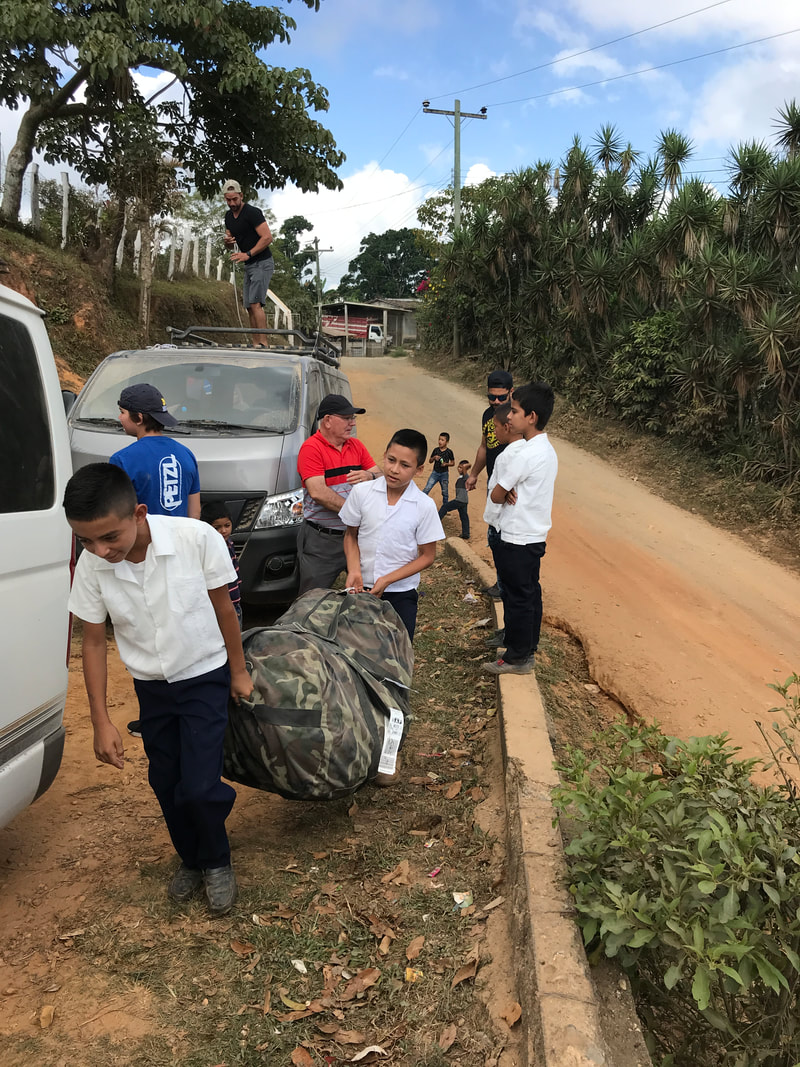 One image that sticks with me from every one of these visits is how willing the kids were to jump in and help. I thought, where are these kids when I pull into my driveway with groceries, because my two young boys sure aren't knocking at the doors begging to help.
​

That's who all these kids were, though. Willingness overflowed from them. They were full of fight and resilience. Nothing in them said feel sorry for me. Everything in them said we're proud to have you visit our home.

So speaking of rockstars - the lead singer, our band leader, our everything was Tiffany Turner. Tiffany is the Director of Outreach and the Travel Coordinator for Soles4Souls. And coincidentally, rumor has it, she really is a rockstar. Like an out of this world singer and musician. I didn't get to experience that side of her, but I did experience her orchestrating each of our stops, setting us up for success, largely eliminating all chaos from what could otherwise be a really challenging process.

I mean, let's just start with the reality of 12 english speaking Americans engaging with 100 or so Spanish speaking Honduran children. 😯 But thank God for Tiffany - she kept us all straight. She helped ensure the experience was beautiful.
​So let me just tell you a little about what a shoe distribution looks like. At each community, 5 of us sat in chairs helping the kids try on shoes. In five chairs across from us 5 kids were trying on the shoes. Before they'd get to us, one of our team members measured their feet. After receiving their new shoes, they'd move to a station where they could choose a gift or two from a collection of donations our travel team brought with us.

That's the logistics of the distribution. That's how it flowed. Now let me tell you about the real magic that happens during a distribution.
just doesn't look like the cow boots type (as if I know anything at all about who does and doesn't appreciate a good pair of cow boots!). When I turned back around, the boots in hand, I was greeted with the most genuine and beautiful smile I've possibly ever seen outside of some baby smiles I used to get from my own two boys. And the inexplicable love I felt in that moment reminds me of holding those boys and those smiles.

I said a silent prayer that these boots were going to fit. They did - thank you God. But the reality is, I think those boots could have been Shaquille O'Neal's old cow boots and this girl was going to walk out of there wearing them.

Over the course of 4 shoe distributions, I saw moments and stories play out like this with all of my Honduras teammates. At one point or another, we all felt this inexplicable love.
​

I'm not sure there is anything more humbling than to hold the feet or look deep in the eyes or be on the receiving end of a hug of someone who's come to expect so little in the world. It's a special kind of gratitude that's untainted by the belief you can have - maybe even deserve - everything you want. It's a gratitude that needs no words, and connects us in a spiritual way I believe we all ultimately long to be connected.

The intellectual and problem solving part of me loves the small business aspect of what Soles4Souls does. I believe that's ultimately the only way to ever wear out poverty. But it was the shoe distributions, the giving away fish without feeling like we had to teach people to fish, that touched my heart in a way I can't really explain.

I guess they made me come to love the Hondurans in a way that made me believe - no - feel, stronger than ever, that all people deserve to have poverty warn out of their lives right here and right now. And even though I've donated a dozen of my own old shoes to Soles4Souls, as I'm writing this, I can count six pairs laying on the floor close by.

Shoes are a given in my life. I take them for granted. And returning from Honduras, I've come to believe there really are some things in this world we should all be able to take for granted.
​Last time Part I - We Are More the Same than We Are Different
Last time Part II - What Motivates You?
Next time Part IV - Do We All Have the Same Opportunities to Dream?